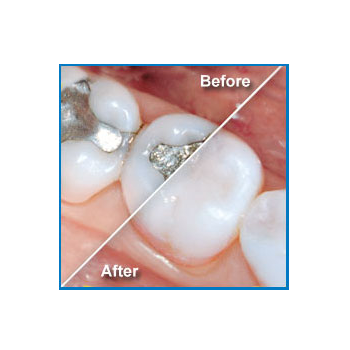 An Alternative to Silver Mercury Fillings

How many silver mercury fillings do you have in your mouth? Are you aware that the silver fillings in your teeth actually unleash dangerous mercury vapor into your central nervous system every time you chew? Mercury poses serious health threats to all children and adults, which has led many nations to either ban silver fillings or strongly advocate for their limitation.

The FDA has acknowledged the dangers of mercury: “The average filling has 1 gram of mercury and leaks mercury vapor continuously… resulting in significant exposure for most [people] with amalgam fillings. Mercury vapor is transmitted rapidly throughout the body, easily crosses cell membranes, and… has significant toxic effects at much lower levels of exposure than other inorganic mercury forms.” Somehow, despite this knowledge, the FDA and ADA still allow silver mercury fillings as standard treatments in the dental community. The good news is that you know better than to accept silver mercury fillings. Many safer and healthier alternatives exist that can preserve your teeth without jeopardizing your well being!

Composite resin, porcelain, and zirconium are all potential replacements for silver mercury fillings, but composite resin has become the most popular choice based on appearance, cost, and durability. These composite fillings are made from a type of plastic reinforced with powdered glass. They do not contain mercury, but they do preserve healthy tooth structure and last much longer than silver fillings.

What If You Already Have Silver Mercury Fillings In Your Mouth?

If you are like so many other adults who did not learn about the perils of silver fillings until years after you received them, it’s not too late to restore your health! You just need to find a holistic dentist who strictly follows the International Academy of Oral Medicine & Toxicology protocol for removing silver mercury fillings, like Dr. Beata A. Carlson and Associates at Natural and Cosmetic Dentistry in Clearwater, Florida.

Since removing silver mercury fillings releases so much mercury, it’s essential to take precautions that prevent the mercury from causing health problems. The doctors uses a rubber dam to isolate other teeth and prevent the amalgam from going down your throat. They also utilizes a super strong dry suction to ensure vapors are eliminated and exit the building immediately. The doctors and their teams also provide important suggestions prior to amalgam removal to ensure your body can properly detoxify mercury. Call 727-888-6523 now to make an appointment at Natural and Cosmetic Dentistry, learn more about silver mercury fillings removal, and begin the important process of helping your body heal from mercury poisoning!